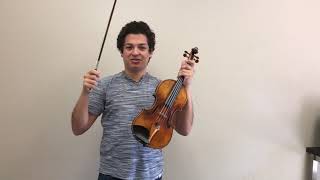 When I finally married the Bon Musica shoulder rest with my SAS chinrest, I thought I achieved the perfect set-up, for myself at least! Before which, I've been through a few other shoulder-rests - Wolf, different kinds of Kun as well as tried a bunch of others from colleagues and shops. At that point, it was trying shoulder-rest after another and I never quite seriously explored the non-shoulder rest option.

I've been playing without shoulder rest for about 3 years now, and while that's perhaps not an extremely long time compared to how long I've played the violin, it has taught me so much about violin technique I've never previously been aware of.

The journey to becoming entirely comfortable playing without shoulder-rest was a tough, challenging and at times painful process, especially since I'm hardly kinesthetically adept. It's definitely not the case for everyone's switch-over though, many of my younger students, and many of my teacher's younger students, switch over with so little struggle, if any at all. Everyone's journey is slightly different, and there are so many factors that come into play, be it violin and/or bow technique, physical built, adaptability or kinesthetic abilities.

So much of my technique changed throughout this process and it took me more than 2 years for my technique to settle in and for me to find a chin-rest I was comfortable with. Many who play without shoulder-rest look for a chin-rest with a scoop to help prevent the violin from slipping while shifting, or just in general more stability for the instrument. In my first year of exploration, I used the Morawetz chinrest which worked really well in my transition, but I soon realised that it set my violin up in an awkward position that I could not quite play at the tip with comfort and this is especially tricky for people for a smaller built, or shorter limbs. After a lot of experimenting of set up positions and chin rests, I was on a quest for centre chin rests and finally settling on the Berber centre chin rest which worked perfectly for my purpose.

Transitioning towards playing without shoulder-rest was no straight road. At some point, I was pretty exhausted and ready to give up but I knew it was a road of no return when I tried to go back to using shoulder-rest only to find that my old set-up was extremely foreign as well. If nothing's going to feel comfortable anyway, I might as well figure out how to play without shoulder-rest efficiently right?

I finally parted with my beaten up Bon-Musica, which had obviously been fashioned way too often, and threw it in the bin when I moved back to Singapore from AZ. It was sitting on my shelf for a while after I ditched it anyway. Of course not before taking one last photo of it, sitting on the carpet of my apartment no less, hahs! =)

There are so many different schools of playing without shoulder-rest, with some, the shoulder still comes in contact with the body of the violin and with some others it does not. It's been really fascinating exploring these different schools with friends and colleagues.

95% of my students currently play without shoulder-rest and while I don't arm-twist them into making the change, most of my students quickly see the benefits and get comfortable pretty quickly after being set up well. I don't convert my students just because I want them to play without shoulder-rest though. Some of my transfer students come to me with various shapes and sizes of shoulder-rests along with awkward set-ups, sometimes the violin in such an awkward place that playing at the tip is such a struggle, or they can hardly stop the violin from pointing to the floor, or there's so much tension in their little bodies, amongst other issues.

With every child, even a 7 year old, I never force them to make the change, I explain things, and we usually make a pact to try for 2 weeks, and if they choose to hold on to their shoulder rest for dear life even after 2 weeks of trying, I would gladly allow them to, although none of my students have actually turned back to shoulder-rest after our 2 week trial.

My younger students who are still using fractional sizes are set up with the Wittner center chin-rest and since the bottom of this chin-rest is slightly uncomfortable on their collar-bone, they also get set up with a shoe-padding. I stock them up in my teaching studio so that once a student whine about any pain, the shoe-padding goes on and they are happy campers again.

So many reasons to try no shoulder-rest. Asians with short limbs, there's so much struggle to get to the tip and to execute a smooth bow change which can be done with so much more ease with a middle chin-rest set-up. The process of ditching the shoulder-rest usually helps awareness of the left side of the body, limbs shoulder joints arm movements and with this awareness comes full control of the body, the ability to release tension and the ability to play with freedom. Of course, during the interim period, so much can go wrong and thus I always make sure students, especially transfer ones, are well settled into lessons before suggesting a change of set-up.

So much more to pen about the journey to no shoulder-rest, but this will suffice for now. Also, procrastination at its best. Before I left Arizona I gathered all my students, studio-mates and some of my teacher's high-school students where all of them spoke about their Journey to No SR since I thought it would be greatly useful for anyone trying to play without SR. Unfortunately it's been sitting in my iPad and even though I've made some efforts to start editing it.... it's not anywhere near done, especially since I'm not expert at video edittng AT ALL! Maybe I need a holiday to get it done? =) And yes, it's been more than a year! *gasps*